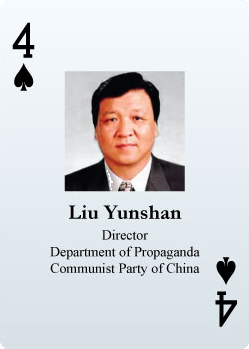 Liu Yunshan is one of the top leaders of the Communist Party of China, and a current member of the Politburo Standing Committee, the de facto top decision-making body of China.

Liu currently holds a number of important offices in the national leadership of the Communist Party, including that of the first-ranked Secretary of the Secretariat, Chairman of the Commission for Building Spiritual Civilization, leader of the Propaganda and Ideology Leading Group and President of the Central Party School.[1] He is generally seen as the top official in charge of ideology, propaganda work, and party organization.